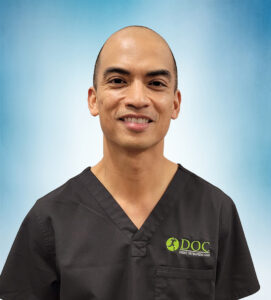 A native of the Philippines, Alex started his medical career in June 1994 when he enlisted as a young Hospital Corpsman in the US Navy. He was stationed in several duty stations to include a four-year tour as an x-ray tech at the US Naval Hospital Guam. In 2004, he deployed as an Independent Duty Corpsman with Battalion Landing Team 1/4, 11th Marine Expeditionary Unit (Special Operations Capable) during combat operations in Najaf, Iraq in support of Operation Iraqi Freedom. After his deployment, he was promoted to the rank of Chief Petty Officer and was hand-selected to attend PA school in 2006. He attended the Interservice Physician Assistant Program, a military PA school accredited by the University of Nebraska Medical Center, at Ft. Sam Houston Army Base in San Antonio, Texas. His didactic year in Texas was followed by a year of clinic rotation at the Naval Medical Center San Diego in California. He completed the PA program, was nationally certified, and was commissioned as a naval officer in 2008.

His first assignment as a PA was at the Naval Hospital Camp Pendleton in California where he provided non-surgical orthopedic care in two clinics for Sports Medicine and Reconditioning Team. In 2009, he deployed as a trauma PA with Shock Trauma Platoon 3, Bravo Medical Company, Combat Logistic Support 2 to provide medical support in Delaram, Afghanistan in support of Operation Enduring Freedom. In 2012, he attended Orthopedic Fellowship at the Naval Medical Center Portsmouth in Virginia. His successful one-year of surgical training was followed by a three-year tour at US Naval Hospital Sigonella in Sicily, Italy, and a five-year tour at the US Naval Hospital Yokosuka in Japan as an Orthopedic PA. He was honorably discharged and retired as a Lieutenant Commander from the US Navy in October 2021 after 27+ years of loyal and faithful service.

New in the state, he and his family (wife - Gen, and children - AC and Emma) found their new home in Allen, Texas. They enjoy traveling, sightseeing, learning about different cultures, and watching movies together. He also enjoys swimming, biking, and running.

You may see Alex Bulan, PA‑C at the following locations