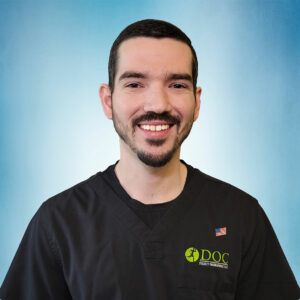 Alex is the oldest of two younger brothers and was raised in the Northern Virginia area. As a native of the area, he stayed from elementary school all the way to his undergrad at George Mason University. After graduating with a degree in Biology, he began working nightshifts for a testing lab company called Quest Diagnostics. Alex worked there for almost one year before starting PT school at Franklin Pierce University where he received my Doctorate in Physical Therapy in 2017. After graduating, Alex moved back home to Virginia where he began working in an outpatient clinic for a large hospital in the area. After two years he moved to Frisco, Texas with his girlfriend where he continued to work as a Physical Therapist for a privately-owned clinic before coming to work for DOC in late 2020.

What inspires Alex more than anything are the patients he comes across on a daily basis and the supportive team he works with. In his free time he likes spending time with his girlfriend, continuing his education, exercising regularly, and enjoying sporting events.

You may see Alex Cruz, DPT at the following location