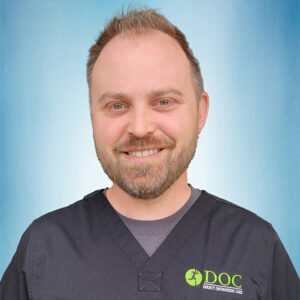 Matt grew up in Wyoming but has lived in the DFW metroplex since 2004. He received his bachelor’s degree in Health Promotion from The University of North Texas in 2007. He spent the first part of his career in the corporate health and wellness field before returning to the classroom to pursue becoming a Physician Assistant.

He received his master’s degree in Physician Assistant Studies from Alderson Broaddus University in West Virginia in 2017. In the beginning of his career, Matt spent time as a PA practicing in an orthopedic clinic and assisting in the operating room with a special focus on knee and hip replacement surgery.

Matt and his wife, Melissa, consider Wylie their home since they first moved there in 2007. They have four children, three boys and one girl, and a dog. He enjoys working with his hands and always has multiple home improvement projects going on at any given time. He recently found a new passion in mountain biking. Matt is passionate about orthopedics and excited to serve those in his local community.

You may see Matthew Young, PA-C at the following location