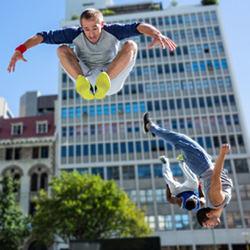 The ACL is one of the most commonly injured ligaments in the knee.

The incidence of ACL injuries is currently estimated at 250,000 to 300,000 annually with 100,000 ACL reconstructions performed each year.   The incidence of ACL injury is higher in people who participate in high-risk sports, such as basketball, football, skiing, soccer, and parkour.   Injury is often associated with deceleration, cutting, pivoting or sidestepping maneuvers, awkward landings, or out-of-control play. The knee joint bone structure is formed by the femur, tibia, and patella.

The ACL is one of the four main ligaments within the knee that connect the femur to the tibia. The medial collateral MCL, lateral collateral LCL, anterior cruciate ACL, and posterior cruciate PCL ligaments hold the knee, a hinged joint, together. The ACL runs diagonally in the middle of the knee and provides rotational stability. A feeling or even the sound of a “pop” can be an immediate indication of an ACL tear or rupture followed by pain, swelling and knee instability. When a patient with an ACL injury is initially seen for an evaluation, the DOC orthopedic surgeon or PA may order X-rays to look for fractures or a magnetic resonance imaging MRI scan to evaluate the ACL and check for injury to other knee ligaments, meniscus cartilage or articular cartilage. An ACL injury without surgical intervention varies from patient to patient and depends on the patient’s activity level, degree of injury and instability symptoms. The prognosis for a partially torn ACL is often favorable with progressive physical therapy and rehabilitation to restore the knee to close to its pre-injury state. About half of the ACL injuries combined with damage to the menisci, articular cartilage, collateral ligaments, or joint capsule. Combined injuries frequently seen in football players and skiers, consist of injuries to the ACL, the MCL, and the medial meniscus. Surgical treatment is usually advised in dealing with combined injuries.

Dr. Sean Hassinger, a DOC orthopedic surgeon, reconstructed a serious ACL injury for a patient guest who was injured while participating in parkour. Parkour is a training discipline like a military obstacle course, which includes running, climbing, vaulting, jumping, flipping, and moving from one place to another going over and under anything in the path, usually in an urban environment. Dr. Hassinger’s surgery was a success and his patient is back to vigorous parkour, his pre-injury state of activity. A torn ACL is surgically replaced by a substitute graft made of tendon. Patients with surgical reconstruction of the ACL have long-term success rates of 82% to 95%. Much of the success of reconstructive surgery depends on the patient’s dedication to a physical therapy regimen. The goal of ACL reconstruction surgery is to restore the function of the torn ligament, creating a stable knee, and ultimately enable the person to return to an active lifestyle. DOC’s orthopedic team manages individual progress and recovery.