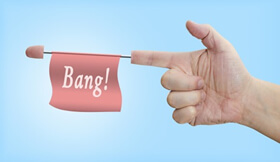 Trigger finger limited Doug’s ring finger movement. When he tried to straighten his finger, it locked before straightening with a snap, like a trigger being pulled and released. Thus, the name trigger finger, stenosing tenosynovitis, a condition that affects the tendons in the fingers or thumb.

Tendons are tissues that connect muscles to bone, enabling some parts of the body to move. Long tendons, flexor tendons, extend from the muscles in the forearm through the wrist and attach to the small bones of the fingers and thumb and control movement. The flexor tendon slides through a snug tunnel, tendon sheath, which keeps the tendon in place next to the bones. If irritated, both the tendon and sheath may thicken.

The thick tendon can become momentarily stuck at the mouth of the thickened tendon sheath tunnel when trying to straighten the finger. When the tendon slips through the tight area, Doug’s ring finger suddenly shoots straight out.

The cause of trigger finger is unknown, but some people are at greater risk for developing it:

When Doug wakes up in the morning stiffness and the catching sensation tend to be worse. As soon as the tendon breaks free from the tunnel, his finger joint feels like it is dislocating. In severe cases of trigger finger, but not Doug’s case, the finger cannot straighten. Doug talked to his DOC orthopedic surgeon, who examined his hand and diagnosed trigger finger.

Doug’s doctor chose to inject a corticosteroid into the tendon sheath. In some cases, this improves the problem temporarily and another injection is needed. If two injections fail to resolve the problem, surgery should be considered. Injections are less likely to provide permanent relief if the patient guest has had the triggering for a long time or an associated medical problem like diabetes. Doug is currently between injections.

If nonsurgical options fail and Doug’s finger gets stuck in a bent position, his DOC surgeon may recommend surgery to widen the opening of the tunnel so that the tendon can slide through easily.