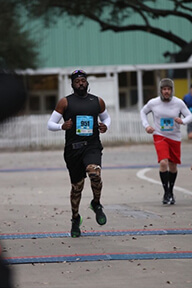 Twelve years ago Adam was a high school football player and tore his meniscus. Athletes, particularly those who play contact sports, are at risk for meniscus tears. Three bones meet to form the knee joint: thighbone (femur), shinbone (tibia), and kneecap (patella). Two wedge-shaped pieces of cartilage act as “shock absorbers” between the thighbone and shinbone. This cartilage, the meniscus, is tough and rubbery to help cushion the knee joint and keep it stable.

As a teenager, Adam went to the ER and the knee was stabilized. Adam’s knee still hurt, but he tolerated the pain. Twelve years after the initial injury, Adam had surgery, but with little or no success, “underwhelming results.”

Then Adam tried a series of treatments with wellness doctors, including physical therapy and exercises. He felt better, but the facility was far from his home and work and became an inconvenience.

Adam could not run or play any of the sports that he enjoys. The injury had become debilitating. He has arthritis and bone spurs in his knee. Posttraumatic arthritis is a form of arthritis that develops after an injury to the knee. Meniscal tears and ligament injuries can cause instability and additional wear on the knee joint, which over time can result in arthritis.

A knee joint affected by arthritis may be painful and inflamed. Generally, the pain develops gradually over time. Other symptoms include:

Adam suffered with all of the above for twelve long years. He found Direct Orthopedic Care online and decided to try once again to discover a solution for his knee pain. Adam received immediate care. His knee was X-rayed and treated with a cortisone injection.

Adam is running and playing ball without pain for the first time in more than a decade. He appreciates the hours, flexibility and high-quality care at DOC.