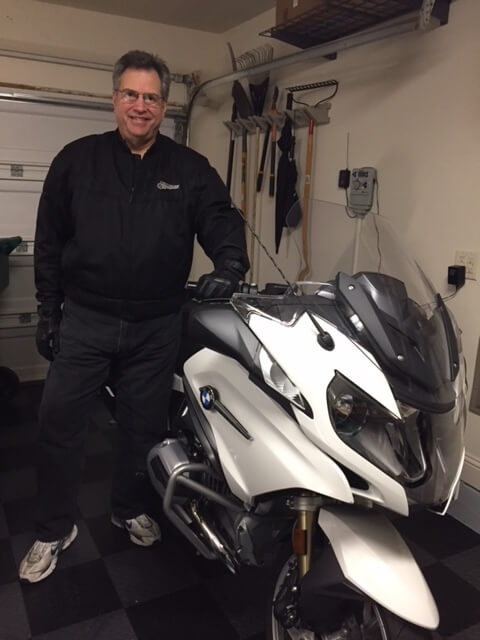 Tom has ridden motorcycles for 50 years. He has only had two accidents with the bike and both of them were in his garage, one 15 years ago and another dropped bike two months ago. He was moving his 835-pound BMW to get it ready for pickup and delivery of a new bike when his bike fell on his knee. Tom was unfamiliar with DOC, but had driven by the DOC location many times. He looked DOC up online, read the favorable reviews, and liked the concept of orthopedic urgent care. He called DOC Frisco and Cari set the tone and his first impression of DOC. Tom came to his appointment a few hours later and met Blake, the PA. After X-rays and a CT scan, Dr. Andrew Freese, DOC orthopedic surgeon, diagnosed a tibial plateau fracture. Three bones meet to form the knee joint: the femur (thighbone), tibia (shinbone), and patella (kneecap). The top surface of the tibia is called the tibial plateau. Fractures of the tibial plateau occur when a force, like an 835-pound motorcycle, drives the lower end of the femur into the soft bone of the tibial plateau. The result is a tibial plateau fracture. Dr. Freese explained nonsurgical and surgical options to Tom. For the nonsurgical choice to work, Dr. Freese emphasized the importance of Tom carefully following his instructions to be completely non-weight bearing for six weeks to let the bones heal without displacing. Tom is uncomfortable maneuvering with crutches so he wore a leg brace and used a walker. Tom is a Flight Crew Training Instructor for Southwest Airlines. He works in a full-motion flight simulator at the flight trainer center in Dallas, which he could not do during his six week, doctor-ordered hiatus. Tom’s impression when Cari set the tone at his first appointment is still his impression five appointments later. “During every visit, I was positively impressed with the caring, competent and compassionate people at DOC. Everyone is professional. The facility is immaculate. I never felt rushed. Dr. Freese is a good teacher and made sure that I understood my options. It’s a first class operation,” Tom adds. Tom and his wife are convinced that the time Dr. Freese spent with them explaining the injury and options paid off. They are happy with their non-surgery decision. It is only three weeks since the brace came off and Tom feels stronger every day with a spring in his gait and walking speeds close to normal. He is back in the flight simulator teaching people how to fly. As soon as his new bike delivers he will be on the road again. He is a long distance rider. He has been a member of the Iron Butt Association for 18 years and rides to Reno, the Rockies, Canada, coast to coast, and plans to ride to Alaska in the future. Tom may be safer with his bike on the road rather than in his garage.