Scott Needs his Knees to Work for Work 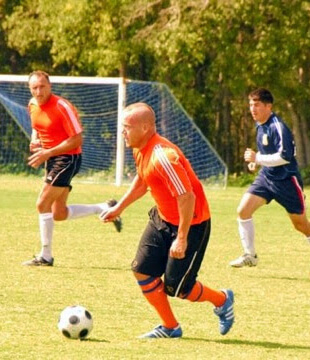 Scott had three surgeries on his knees, one on the left and two on the right. After the first surgery on his right knee, Scott couldn’t get out of bed and lost 30 pounds in a month. The knee screamed infection, but even an infectious disease specialist and cultures of the knee did not provide answers. The knee was operated on again by the same orthopedist to clean it out. Scott was able to play soccer and work. His right knee hurt on the outside and he suffered excruciating pain if he would squat to do his home construction and inspection work. It felt like his knee was “in a vice.” In 2017, he went to DOC for an MRI, which revealed a cyst on his kneecap. Knees work best if they are well lubricated. A thick substance called synovial fluid or hyaluronic acid lubricates the knee joint and allows the bones to glide smoothly against each other and acts as a shock absorber. Loss of the fluid can cause stiffness and pain. The DOC orthopedic surgeon injected Scott’s knees with hyaluronic acid gel. For some guests, it provides significant relief. For Scott, the injection helped the better left knee, but not the right knee. Scott’s new insurance plan included DOC and since DOC had done half of the “legwork” he returned in 2018 for another MRI. The team at the DOC office is “awesome and my appointments are smooth and easy.” Dr. Chris Hall, Scott’s orthopedic surgeon, saw a second cyst on the tibial head. In October 2018, Dr. Hall performed his first surgery on Scott’s knee to clean out the excessive scar tissue, remove two cysts, and inject both knees with stem cells and PRP. Stem cells were harvested from Scott’s bone marrow and Platelet-Rich Plasma (PRP) was a simple blood draw. Both the stem cells and PRP were centrifuged with growth factors and injected into his damaged knee joints while under anesthesia. Dr. Hall recommended regenerative medicine therapies to stimulate an aggressive healing response after surgery. A week later, Scott was back on ladders during his busy holiday work season. He hangs and removes Christmas lights from mid-November to mid-January. He didn’t have time to rest and recover because of work, but will get back in the gym, playing soccer and running to regain his strength since his intense work season is over. Scott will go to see Dr. Hall for a three-month follow-up and may have another PRP injection if necessary. Scott says, “Right now my knees are better than they have been in years.”