Rachael’s Reconstruction and Regeneration at DOC 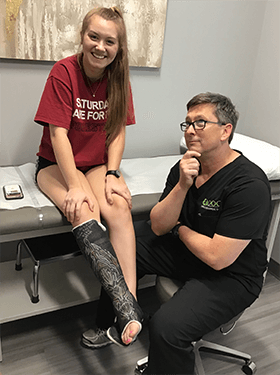 Rachael came home to Austin from college in Chicago for summer break to visit her mother, a colonel in the U.S. Army stationed at Camp Mabry. Rachael got a summer job at a restaurant and was constantly on her feet. When her ankle became swollen, “the size of my calf,” and sore, she went to an urgent care and was referred to DOC. After a thorough examination and an MRI, Dr. Andrew Moore, orthopedic surgeon and U.S. Air Force Colonel, diagnosed ligamentous insufficiency and a large osteochondral (OCD) lesion. Rachael felt “right at home” with a physician colonel.   Rachael plays Lacrosse and rolled her ankle on a wet grass field two years earlier and heard a “pop.” She went to the ER and her injury was diagnosed as a sprain. She followed up with a specialist when she came home to Texas that summer from college, who confirmed no fracture; just a sprain and she went on her “merry way.”   Dr. Moore determined that Rachael’s injuries were old ankle damage. He carefully explained the injuries while showing her the MRI images. Lateral ligament complex stabilizes the ankle and instability can result from an acute injury, such as her Lacrosse sprain or chronic repetitive stress, including sports activities and waiting tables. Osteochondral lesions are injuries to the talus. The tibia, fibula and talus bones form the ankle joint, which manages the up and down motion of the foot and ankle. Rachael’s large lesion was on the dome of the talus under the cartilage.   Rachael underwent a detailed reconstruction of her lateral ligaments and OCD lesion, utilizing allograft tissue, which is bone and cartilage from a donor. During surgery, Rachael was injected with her own stem cells, previously harvested from bone marrow and centrifuged. Her stems cells will help to heal and regenerate her lateral ligaments and talus cartilage. The goal of her surgery was to reduce pain, establish joint stabilization, and normalize ankle movement.   Rachael was in a hard cast for three weeks and then a boot. She had to leave Austin to go back to school in Chicago, while still wearing the boot and non-weight bearing for three months. She explains her dilemma: “ I am super active, a student athlete, so it was hard to take a back seat. I had to be a big girl and watch. I borrowed a scooter from a friend and was able to still participate as football manager. I have two screws in my ankle that Dr. Moore may remove when I come home for Christmas to show off my progress. I’m in physical therapy and have a few more degrees to go to attain full dorsiflexion, moving my foot upwards.”   Rachael has big dreams for the future. She finishes her undergraduate degree in May 2019, with a biology major and music and business minors. She is interested is biomedical science and hopes to continue her education in one of two fields of study. Rachael’s mother and Dr. Moore are both military. Rachael would like a career in orthopedics, possibly as a biomedical engineer, focusing on prosthetics for injured and disabled service people. Her second choice is aerospace medicine, often in a military setting, providing medical management in the environments of aviation and space.